Every day, Dennis Brown commutes on the No. 800 bus at 3 a.m. And every day, the bus rolls through 51st and Telegraph–a spot dear to Brown, a longtime Temescal resident. Get to know one of the intersection’s most visible personalities in the story and audio slideshow below.

The 800 bus — AC Transit’s “all-nighter” — is a rough ride. Bus drivers tend to snarl more in the wee hours, loose hinges on grimy windows shriek with every pothole, and passengers have even tased each other. Five days a week, Temescal resident Dennis Brown catches this bus at 3:45 a.m. He works the dawn shift at Lucky’s grocery store in El Cerrito, and the grueling 800 bus has served as his commute for two years. 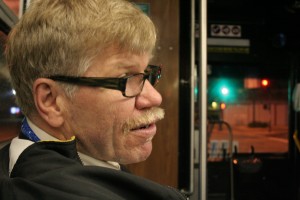 Shutting up and avoiding eye contact are key to a peaceful 20-minute ride, and that’s hard for Brown, 50, one of Temescal’s most outgoing residents. In other circumstances, he might pull out CDs from his duffel bag and launch into a discussion of Bay Area punk clubs in the 1980s. But Brown’s fellow riders are often half-asleep, or coming home from bars, and almost certainly uninterested.

“It’s a good exercise for me, the idea that I can’t be friends to everybody,” he says.
But back on his home turf of Temescal, the bustling neighborhood centered at 51st and Telegraph, it seems like everybody is Brown’s friend.

When he strolls along Telegraph Avenue, Dennis, highly noticeable with his bristly blond mustache and big tinted glasses, has a way of pulling locals out of their seeming aloofness.
The lanky young woman carrying a cello? She doesn’t stop walking, but she does turn back and say hi. The badass in the motorbike jacket, his helmet-toting girlfriend at his side? They stop and have a long-time-no-see-type chat with Brown. The flour-smeared woman in the neon blue wig? That’s Alison Barakat, the woman behind the wildly popular bakery on the southeast corner of 51st and Telegraph, Bakesale Betty. Of course, she knows Dennis Brown.

“He’s really one of the famous people of the neighborhood,” says Barakat, who knows Brown better than most–she’s one of his employers. Every Sunday morning, Brown puts on his restaurant whites and helps clean at her wildly popular bakery.

And it’s when he’s wearing his uniform that he really shines. There’s something about his neat yellow hair, parted on the side, his soft-spokeness, and his steady, deliberate way of sweeping the sidewalk and taking out the garbage that evokes the dependable fellows of hunky-dory 50’s films.

“He’s a goodwill ambassador,” said friend and neighbor Gene Malacarne, 83. “He has the type of personality that he makes acquaintances very easily.” 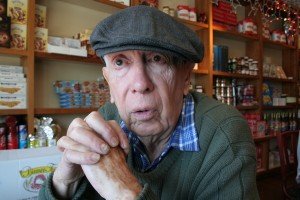 “He does it by asking people to sign his birthday book,” says Barakat, referring to Brown’s battered paperback of Alcoholics Anonymous affirmations for every day of the year. It is a relic from his days in Alateen, a support group for the children of alcoholics. People sign the affirmation corresponding to their birthdays.

“When he does that, I think he’s just trying to get a little bit of information about you,” says Malacarne.

Brown memorizes people’s birthdays, and a lot of other things.

“He’ll just come out of the blue with trivia and facts about famous people or TV shows or songs,” says Barakat. “He’s a walking encyclopedia.”

He moved to north Oakland from El Cerrito in 1983, a 24-year-old itching to be part of the Telegraph Avenue scene. Slowly, his orbit expanded beyond punk clubs and dive bars, and Brown started hanging out at the famous Genova’s Delicatessen and the now-defunct G&G Hardware. Today, you’ll often find him browsing with his wife, Florence, at the Temescal Farmers’ Market or running Bakesale Betty’s concessions at the annual Temescal street fair.

In addition to Bakesale Betty hiring him for a Sunday cleaning shift, other merchants have watched out for Brown, a severe dyslexic who is unable to drive.

Nan Eastep, owner of B. Spoke Tailor, is one of those merchants. After getting hit by a car twice while riding his bike, Brown started wearing a yellow safety vest. Eastep, a clothing designer who sells biking knickers and caps at the farmers’ market, gave his vest some local flair by stitching a folksy “Oakland” applique across the back, complete with little oak-tree patches. “He’s very proud of Oakland,” she says. 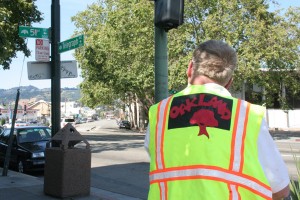 “I welcome people into the neighborhood by giving them a map of Temescal,” he said. “And if they need help finding something, I can point them in the right direction.”

He also reaches out to longtime residents, like his friend Malacarne, an 83-year-old bachelor and self-described pessimist who lives alone in his family’s old home on Clarke and 49th streets. Brown usually visits Malacarne on Sunday afternoons, after his shift at Bakesale Betty.

“My interest in a lot of things has begun to vanish,” said Malacarne. “The only thing that makes me happy is Dennis visits me once a week. You don’t know how much I appreciate his concern.”