The buzz surrounding the race for the office of California this year focused almost entirely on Jerry Brown and Meg Whitman, the front-runners throughout. As of 11 p.m. Tuesday, Brown, the career politician, was leading billionaire candidate Meg Whitman by a 4 percent margin with 21.8 percent of precincts reporting.

But the Green Party’s Laura Wells was one of four other candidates who took a stab at the seat. Wells is a longtime Oakland resident, with a background in both citizen activism and business. On election night, she gathered with other local Greens to close out the election season at La Estrellita Café and Bar in East Oakland.

A Detroit native who moved to California 30 years ago, Wells ran with a heavy focus on education, energy and health care. She also is a dedicated opponent of Proposition 13, which was passed in 1978 and put heavy limitations on property tax in California. Wells stands with the Green Party on all major issues, including support for gay rights, same-sex marriage, the legalization of marijuana, and changes in immigration policy.

On Election Day, Wells thought she might miss her final opportunity to campaign. Wells was arrested on October 12 at a gubernatorial debate at Dominican University, and her arraignment was scheduled on the spot for November 2. The debate was solely between front-runners Whitman and Brown, as the only candidates polling above 10 percent, but Wells showed up outside to protest her exclusion. After she was given a non-transferable ticket she tried to use, confusion ensued and Wells was arrested (read the full story here).

Last night though, Wells got news that Marin County has decided not to proceed with the charges for now. This was the first time she had heard from the county, she said, since the day she was arrested. Inflamed by the incident, Wells is now considering bringing her own suit against the county, a move that illustrates the Greens growing frustration with being marginalized by the Democratic and Republican Parties.

“The big issue here is the narrowing down that’s happening everywhere,” said Wells, sitting at a table in La Estrellita wearing a green sweater festooned with a leaf-shaped (not cannabis) brooch. She went on to talk about the isolation of being a third-party candidate, and the difficulty Greens face garnering media attention. “The biggest thing this experience has made me realize is that if someone said, ‘Laura, would you rather have the $150 million Meg Whitman spent on this campaign, or the free press that she’s gotten,’ I’d take the free press,” said Wells. “I’d take the free press just so people could learn more about what the Green Party is.” (The actual reported total that Whitman spent was $160 million—$140 million of which was reported to be her own personal funds).

Fellow party members and candidates Peter Allen and Don Macleay, who both attended the festivities at La Estrellita, echoed this sentiment. Allen, a veteran attorney who ran under the Green banner for California Attorney General (at 11 p.m., Republican Steve Cooley was leading Democrat Kamala Harris by 7 percent with 21.8 percent of precincts reporting), expressed similar frustrations. “As a third party candidate, it’s hard to get any exposure,” he said. “Once people finally meet me and hear my positions, they like me, but they also wish they’d known about me earlier.”

“My biggest complaint is the news services,” said Macleay, who ran for mayor of Oakland.  This election is still undecided, with Don Perata leading, but Macleay acknowledged that he doesn’t have much of a chance. “The press is the real thing that dictates these outcomes,” he said.  “They starve us for light and water and then they say, ‘these are the front-runners.’”

Still, the atmosphere at La Estrellita was a festive one, with Greens applauding the potential failure of Proposition 23, sipping beers and making hopeful plans for the future. Orlando Johnson, Don Macleay’s campaign manager, was enthusiastic about the experience he and Macleay had breaking racial boundaries in Oakland throughout their campaign. “I think it was a great experience,” said Johnson. “I learned that we can help end racism, and all without taking corporate money. Don and I will definitely be working together in the future.”

Wells also said she intends to keep the momentum from this campaign. “I’m not a short term kind of person,” she said. “I like to fix something so it doesn’t happen again. Having this end and letting it wither and die doesn’t sit well with me.” But before she goes back to work for the Greens, Wells has more pressing plans: a cruise to Mexico with her fiancé on Saturday. “I’m going to eat,” she said. “Eat and dance.” 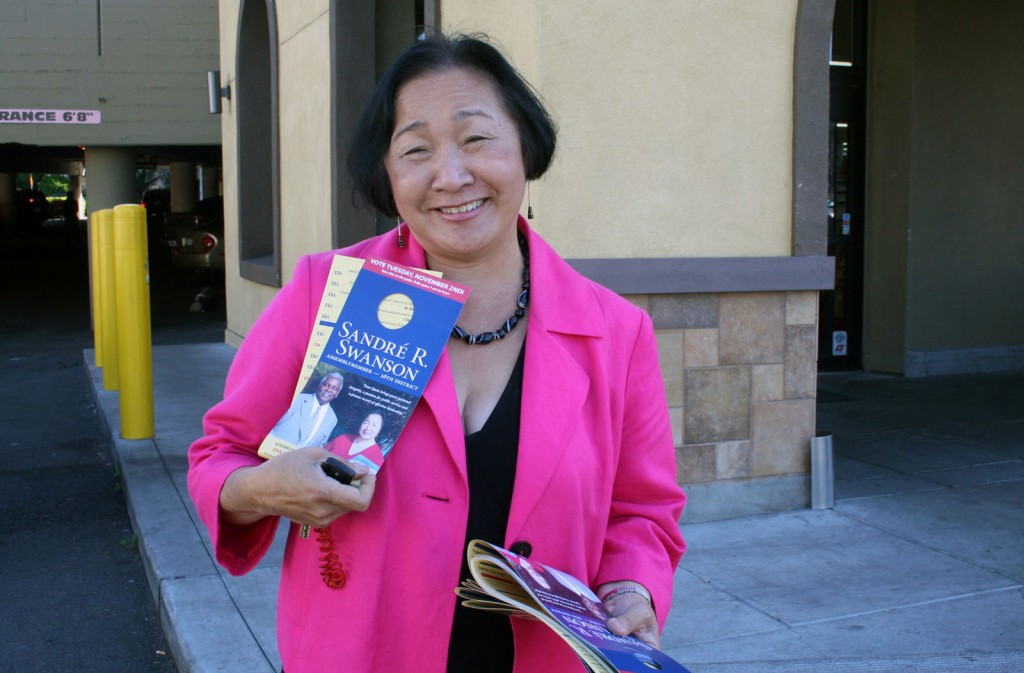