On Saturday afternoon, Occupy Oakland protesters gathered in Frank Ogawa Plaza with a goal: To occupy a building and convert it into a social center to be used for the planned Oakland Rise Up Festival this weekend. But what began as a march with several hundred people quickly turned into yet another turf battle between protesters and the Oakland Police Department.

With signs and banners in hand, and with a sound truck blaring music and a bus following closely behind, the march was on.  At about 1:30 pm, chanting “We are unstoppable, another world is possible,” carrying shields made of garbage can lids and holding up traffic, protesters took to the streets of Oakland to march to an undisclosed location which Occupy leaders had chosen to take over.  Many of the protesters didn’t know where they were going.

“Make a right,” screamed a group of protesters.  “No, it’s a left,” yelled others, as they wove through the streets near Laney College trying to find the building they were supposed to be occupying.

“I think this is great,” said Oakland resident Grayson Wolfe, 24, as he tried to figure out what the next move would be. “Hopefully the city supports us, and doesn’t do much to stop us.”

The march continued to grow, but not everyone in the streets had come out to support the protests.

“I’m here because I think Occupy Oakland is hurting the working people instead of helping,” said Don Grundman, 59, of San Leandro as he held a sign that read “Occupy attacks working people.”  “This makes people feel good,” he said of the protest.  “It gives everybody that warm feeling like they’ve accomplished something, and at the end of the day, they’ve accomplished nothing.”

As the protest threaded through the downtown, police officers began to form barricades along the streets.  Every street the protesters turned down, the police followed. After being blocked by police from moving past 10th and Oak Streets, protesters took an unexpected turn toward Laney College. Hundreds of people marched through the campus, leaving the sound truck and bus behind.

While at Laney, protesters marched up a hill, and were soon met by a police line near the campus tennis court.  As some protesters tried to decide if they should stay or keep walking, others crossed over a foot bridge and kept on marching, still unclear about which building they were supposed to be occupying.

After crossing the bridge, many of the protesters realized that they were headed for the former Henry J. Kaiser Convention Center, the organizers’ intended takeover site. But by the time they arrived, the police had that blocked off, too. Dozens of officers stood around the building, stopping anyone from entering.

“It’s sad that there’s 8,000 empty buildings and the city couldn’t spare one,” said Oakland resident Vincent Demarti, 40, who was observing from the sidewalk.  “This is an attempt to keep people from participating non-violently.  It’s instilling fear.”

Marchers then began tearing down the fencing around the Kaiser Center. According to an OPD press release, police officers issued an order to disperse once protesters began to throw bottles, rocks, spray cans and other items at officers.

Once protesters realized that the police had blocked off the building, they began marching back in the direction of city hall, only to have their progress blocked again by a line of police officers at 10th and Oak in front of the Oakland Museum of California.

As protesters began moving closer and closer to the police line, officers shot tear gas and smoke grenades at the crowd.  While the marchers retreated a bit, they did not leave.  Soon after, protesters began throwing chairs and rocks at the police. For a second time they advanced toward the police line, protecting themselves with corrugated metal barricades and homemade shields. Police began a new barrage of tear gas and also shot bean bag projectiles into the crowd until people began to move backwards, fleeing the advancing police line.

According to an OPD press release, three police officers were injured and approximately 19 protesters were arrested at this point.

The rest of the crowd congregated and regrouped at 11th and Madison.“I support what they [protesters] are doing,” said Oakland resident Nora Shourd, 63, who was participating in the protest.  “I think we need to do radical moves.  This is just the beginning.”

As protesters marched back up 12th Street, they were followed by a line of riot police until they reached Frank Ogawa Plaza. By 4 p.m., the protesters were discussing which building they would next try to occupy.  At 5:20, they left the plaza and headed up Broadway amongst stalled traffic to attempt to take over the former Traveler’s Aid Society’s building on 16th Street, a building protesters had tried to occupy in November.

But when the crowd got to the building, they realized there were people inside working. “Be on the right side of the law,” said one protester as he tried to persuade the workers to unlock the building.

“I’m just trying to make a living,” responded the worker, who was installing a glass window.

The protesters kept walking, and ended up at the Henry J. Kaiser Memorial Park next to the Fox Theatre.  The police briefly contained the marchers in the park, but then allowed them to leave.

The protesters kept on marching. Their next stop was the Oakland YMCA on Broadway.

“The occupiers came charging in [the YMCA] going all over the place—jumping over the counters, hiding in the exercise room,” said an Oakland resident who gave his name as Japan Shirley, age 65, as he was trying to get to his car, which had been blocked by a police barricade.  “They scared the hell out of me.”

“Then,” he continued, “The police came in there.  Hell, they thought everyone was with the occupiers.  I said, ‘I’m a member, don’t hurt me.  I’m just here to exercise.’”

Police officers gave a final order to disperse, after which they informed protesters that anyone remaining at the YMCA would be arrested. Approximately 200 protesters were ordered to sit down where they were standing as police went around to make arrests. (A press update released by the OPD at about 10:30 pm stated that approximately 200 people had been arrested by that time.) A handful of journalists were also taken into custody at this time, although as of early Sunday morning all five journalists who reported that they had been arrested had been released.

Meanwhile, other protesters headed back towards Ogawa Plaza and reassured people that the planned Occupy Oakland Rise Up Festival will still happen Sunday at the plaza. “I didn’t think this would be a cake walk, and it’s not over yet,” said protester Shourd as she returned to the plaza. “It may not work the first time, but failure doesn’t mean you quit.”

By 8 pm most of the crowd had dispersed, but a few protesters broke into the lobby of City Hall, where one person burned an American flag.  Police quickly surrounded the front entrance and began to guard the building. By 9 pm everything at the plaza appeared to be calm, with the exception of a few officers remaining at the entrance to City Hall.

By 11:30 pm, the OPD had not yet released an official tally of the number of people arrested.

This story was updated on Sunday, January 29, around noon to add the OPD’s 10:30 pm arrest estimate.

Text and photos by Byrhonda Lyons and Megan Molteni. 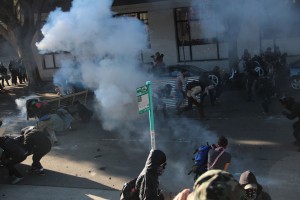 During attempts today to take over a building in Oakland, Occupy protesters clashed with police forces. OPD used tear gas and crowd-control projectiles against the crowd throughout the day. An Occupy protester is arrested near the Henry J. Kaiser park Saturday night. Hundreds of other protesters were later arrested after breaking into the downtown Oakland YMCA. Occupy Oakland protesters gather in the street next to Frank Ogawa Plaza Saturday afternoon before they attempted to move in to a number of buildings in the city. Bandwidth: Alexa Weber-Morales wants to work for you