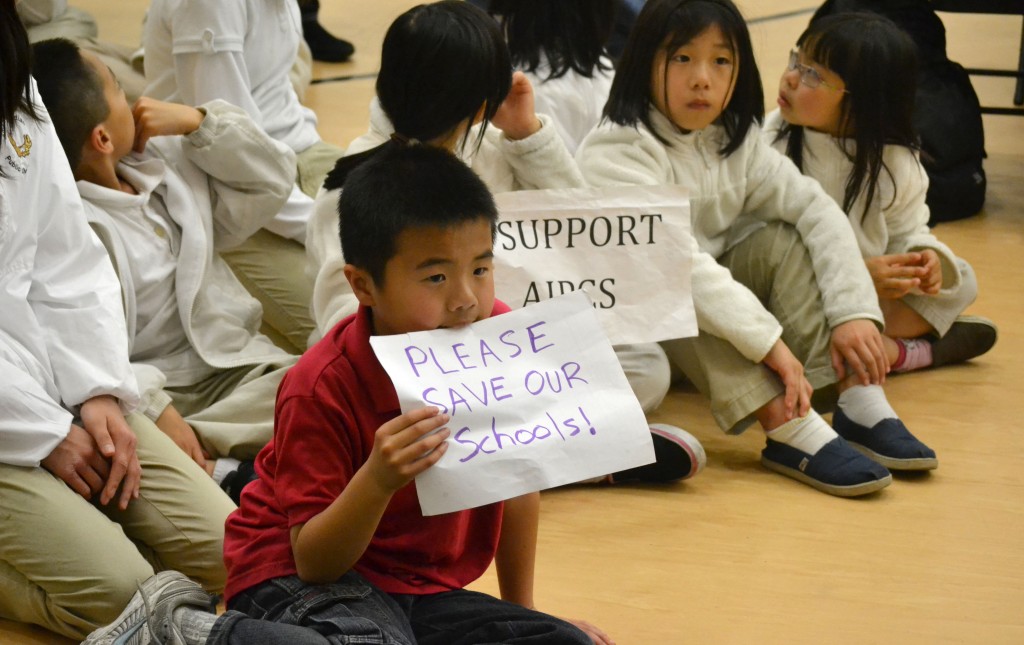 At a long-awaited special school board meeting, and after over six months of hearings and notices, Oakland Unified School District board members voted to revoke the three American Indian Model Schools’ (AIMS) charters. The 4-3 vote came after Superintendent Tony Smith recommended the board revoke the charters, and after a particularly emotional and dramatic series of public comments and discussion.

Hinton-Hodge was the only board member who seemed to be undecided until the very last moment. The others gave their yes’s and no’s to loud boos or strong applause, respectively, from the AIMS community. When Hinton-Hodge ultimately voted “no,” she received a standing ovation.

After Wednesday’s final vote, administrators will have the chance to appeal to Alameda County and the State of California. If they appeal and lose, the schools will close in June. A shutdown would affect over 1,000 downtown and East Oakland students.

The vote came almost two months after the OUSD voted to begin the process of revoking the charters, and almost three months after AIMS administrators submitted a response to a “notice of violations” given to them by the district in September. The notice was one of a series given to AIMS administrators alleging improper business contracts with AIMS founder Ben Chavis’ businesses, inappropriate credit card usage and lack of school board meeting documentation.

At Wednesday night’s meeting, OUSD board general counsel Jacqueline Minor said that the Alameda County district attorney was reviewing the case, but no charges had been made against Chavis.

AIMS students and parents were at La Escuelita Elementary School, where the board meeting was held, well before the start time, with large, signed banners and posters saying things like: “We grow with AIPCS,” “We like our family school,” or “Don’t stop what works.” As meeting attendees walked by, the group chanted “A-I-P-C-S” loudly outside the entrance to the La Escuelita gymnasium.

Over 20 AIMS community members spoke directly to the board before the vote took place, each of them asking the board to keep the schools open. “I never thought there would be a change of mind, no matter what we did. It was your responsibility to get your money from Chavis since you said he robbed you. That’s on you,” said AIMS board president Toni Cook. “Yes, we are going to appeal. Oakland’s children have a right to an alternative education. They’re not coming to your schools. You know that.”

Before the meeting and after the vote, many parents of AIMS students discussed moving to Alameda or Castro Valley for better public schools. Araceli Parra told the board that she would never send her son back to an Oakland public school, where he’d had bad experiences in the past. “My son was bullied at Glenview Elementary School. At one point, some kids slammed him into a desk over a ball and the teacher did nothing to stop them,” she said. “There’s no way we’re staying here.”

Another mother, Hong Mei Li, an immigrant from China, said she, and many other immigrant families, didn’t know what they could do. Li said she works 20 hours a week as a cashier at the Oakland International Airport and supports her parents and two kids as a single mother. “We came here for a good education system and I don’t understand why they haven’t found a way to work all of this out,” she said, tearing up. “I don’t trust any of these people anymore and next election, I won’t even bother voting.”

The disconnect between immigrant families and school processes was at the forefront of the meeting. While parents accused the board of politics and egotism, some board members said that they thought parents should have been more involved in the schools so that they could encourage leadership to fix things faster. “Just because a school’s academics are alright, it doesn’t mean that the school is doing alright. A lot of it depends on parents stepping up and staying involved,” said District 1 board member Jody London, who ultimately voted “yes” to pass the motion to revoke the charters. “We can’t just turn our heads because test scores are high.” She finished her comment to loud boos and even some people yelling “Bullshit!”

The next steps for AIMS administrators involve appealing the decision to Alameda County and the state of California, which they have already indicated they will do. Parents, meanwhile, will be trying to reassure their kids that they will still be able to attend school with friends next year.

Ucag Udemezue, the father of an AIPCS student, said he was surprised that the board even got to the point of closing the schools down because many of the issues cited in the notice of violations related to managers, including Chavis, who are no longer involved with the school. (Chavis stepped down from a leadership position at AIMS in 2010; Sylvester Hodges is the current AIMS executive director.)

“Ultimately, it’s the students and teachers that are going to be affected, not the people who caused the problem,” Udemezue said. “When elephants fight, it’s the grasses that suffer.” Youth Alive! tries to break cycle of violence in Oakland