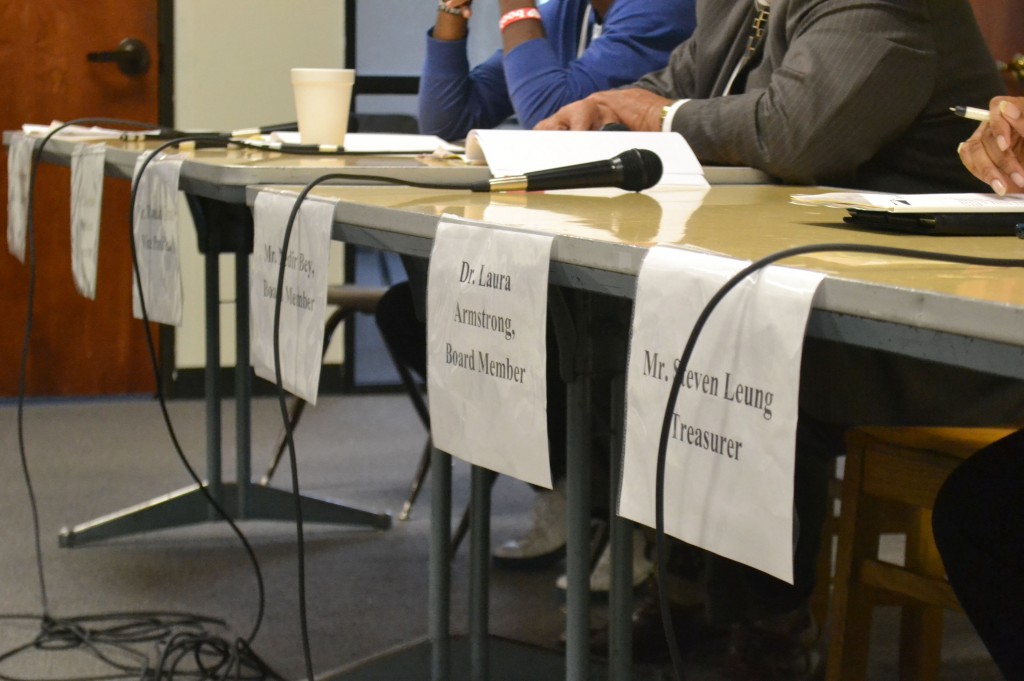 At AIMS meeting, few answers on the future of the schools’ leadership

It may have been the shortest meeting of a charter school board in recent history. The American Indian Model Schools (AIMS) board met publicly Tuesday for approximately ten minutes, after a closed session, to discuss the recent tumult in the schools over their management and their future. There was one public comment, four action items and a quick adjournment.

Tuesday night’s meeting was a follow-up to two contentious meetings held over the weekend, when in closed session board members voted to fire schools director Sylvester Hodges, after which board president Toni Cook stepped down. Angry parents and teachers attended both of the meetings, protesting the firings and expressing anger at the board’s lack of communication with the public. On Friday, they demanded that four of the six members resign immediately.

At Tuesday night’s meeting, board members approved the employment contract of Maria Cecilia Coca who will most likely replace Jennifer Avelino, the schools’ previous site administrator, whom the board also fired on Friday. They also approved an agreement with LCB Commercial Real Estate for the management of 171 12th Street, which is the site of American Indian Public Charter School II. Action items, one to officially hire Nabeehah Sabree Shakir as the new director of the schools and another to respond to the demands that board members resign, were both tabled. Board members did not allow for public comments on the action items.

The turmoil within the AIMS community has intensified since March when the Oakland Unified School District voted to revoke the three schools’ charters, after months of meetings discussing the management of the schools by their founder, Ben Chavis. The vote to revoke came almost three months after AIMS administrators submitted a response to a “notice of violations” given to them by the district in September, 2012. The notice was one of a series given to AIMS administrators alleging improper business contracts with Chavis’ businesses, inappropriate credit card usage and lack of school board meeting documentation.

Current administrators say they will appeal to the Alameda County Office of Education to keep the schools open because of their superior academic track records. If the appeal to the county is denied, the schools could shut down in June. Over 1,000 students would be displaced.

On Tuesday, administrators urged parents and teachers to call the county and show their support for the schools, and one board member stayed a few minutes after the meeting was officially over to reassure teachers that their salaries were still being paid.

Though Shakir’s contract hasn’t been publicly approved yet, an American Indian Public Charter School II teacher who didn’t want to give his name said she has already visited classrooms to meet with teachers and students. Karyn Woodsum, a parent with students at the junior high school, said Shakir also sent out a memo to parents to introduce herself and to inform them of a community meeting that will take place Wednesday to discuss the strategies administrators are pursuing to keep the schools open. “We must work together as the AIM Schools family to ensure our schools are approved by the Alameda County Board of Education,” stated Shakir’s memo. “I met with some teachers today and they are doing a good job.”

After the brief meeting, approximately 30 to 40 teachers and parents stayed on to organize a game plan for the coming months. In order to keep the schools open, Woodsum said it was necessary that they “gush about the students and teachers” to county officials in order to support the appeal. “It doesn’t matter that this board is useless,” she said. “We need to tell the county about how hard-working our students and teachers are so that we can maybe have the schools next year.”

Woodsum also said many of the parents whose students attend AIMS schools feel they’re stuck, because the schools are academically sound, but the parents don’t all agree with their leadership. “It’s a terrible situation because I know for a fact that if there were another school that had teachers as great as this one does, I would pull my kids out of here in an instant,” she said. “But there isn’t.”