Despite a roar of support, Port of Oakland truckers meet resistance in negotiations

Port of Oakland truckers frustrated over their working conditions met for negotiations in City Center yesterday amid the din of two dozen tractor-trailers blasting their horns.

At noon, the truckers’ delegates walked into City Hall to meet with Oakland Mayor Jean Quan, Deputy Mayor Sandré Swanson, Port Director Chris Lytle and officials from the Bay Area Air Quality Management District and the California Air Resources Board (CARB). Shortly after the doors swung shut behind them, the sound of their approaching supporters became audible outside. It started as a distant clamor and swelled into a deafening howl, which lasted for over an hour as the semis, most of them without trailers, rumbled in slow circles around the block.

Most passersby took it in stride, pausing during their lunch break to laugh and snap photos with smart phones, surprised at the sight of so much heavy machinery on an otherwise quiet fall day in Oakland’s downtown. But the noise rattled at least a few people out of their cubicles. One man arrived on the sidewalk and lit into the first person he saw – who happened to be a reporter for KDTV Channel 14. The man demanded that the ruckus be stopped. After all, people were trying to work, he said. Then he stormed off.

When Oakland Police attempted to issue a citation to one of the truckers, a crowd of activists responded with a PA system and chants of, “Tear up the ticket!” A crowd gathered and Camila Ramos, 15, who had ducked out of high school in Alameda to support her father, a trucker, grabbed the microphone and began berating the officers. In the end, no citations were issued.

Yesterday’s fracas followed demonstrations in August and October in which independent truckers twice forced the port to close temporarily. Organized under a group called the Port of Oakland Truckers Association, they are pushing for concessions on air pollution regulations due to be implemented at the end of the year, among other concerns. The rules require all truckers at the port to purchase rigs with relatively clean, 2007 engines.

At Wednesday’s talks, the drivers had hoped to win a year-long deadline extension from the state Air Resources Board. They were unsuccessful, despite the roar from the street, which filtered into the meeting room.

“They weren’t budging,” said Frank Adams, a leader of the truckers association, in an interview after the meeting. “We pleaded with them. We even said give us six months. They said they’re not going to do it.”

Mike Sutherland, an air resources supervisor at the state agency, said truck drivers have had several years to comply with the regulations and, with financial assistance, the majority have done so. Sutherland said the agency has not pinpointed exactly how many trucks are still out of compliance, but he said data collected by the agency indicates that after the deadline, there will be enough trucks to serve the port.

“We see the capacity of trucks that are needed for the port will be fine,” Sutherland said. “There will be enough capacity.”

The truckers have contended hundreds of drivers could be out of a job come January.

In yesterday’s talks, they were also pushing for a fresh round of funding to help them upgrade their vehicles. A used, compliant rig may cost between $40,000 and $80,000, according to Adams. He said the truckers are still cautiously optimistic that more funds will be forthcoming.

The truckers will continue to talk with city and port officials over the next week. Frank Adams, of the Port of Oakland Truckers Association, spoke to the press before meeting with state and local officials in Oakland City Hall on November 13. Photo by Terray Sylvester Since late October, frustrated port truckers have enjoyed the support of Oakland’s activist community, many of whom met during Occupy Oakland demonstrations. Photo by Terray Sylvester Frustrated truckers from the Port of Oakland sounded their horns outside of City Hall on November 13. Photo by Terray Sylvester A line of semis from the Port of Oakland rolled around City Hall for over an hour on November 13. It was an odd sight on an otherwise quiet fall day. Photo by Terray Sylvester A passing ambulance, a fire truck and other passing vehicles honked in solidarity as port truckers demonstrated in downtown Oakland. Photo by Terray Sylvester Camila Ramos, 15, joined the protest on her way home from high school in Alameda. Her father drives a truck at the port, and she worries her family’s income is threatened. “I felt like if it came from someone younger … they would hear it louder,” she said after speaking at the protest. Photo by Terray Sylvester A picketer crossed 14th Street during the demonstration. Leaders of the Port of Oakland Truckers Association say the group has some 250 members. Roughly 6,000 trucks are registered to operate at the port, though fewer do so on a regular basis. Photo by Terray Sylvester 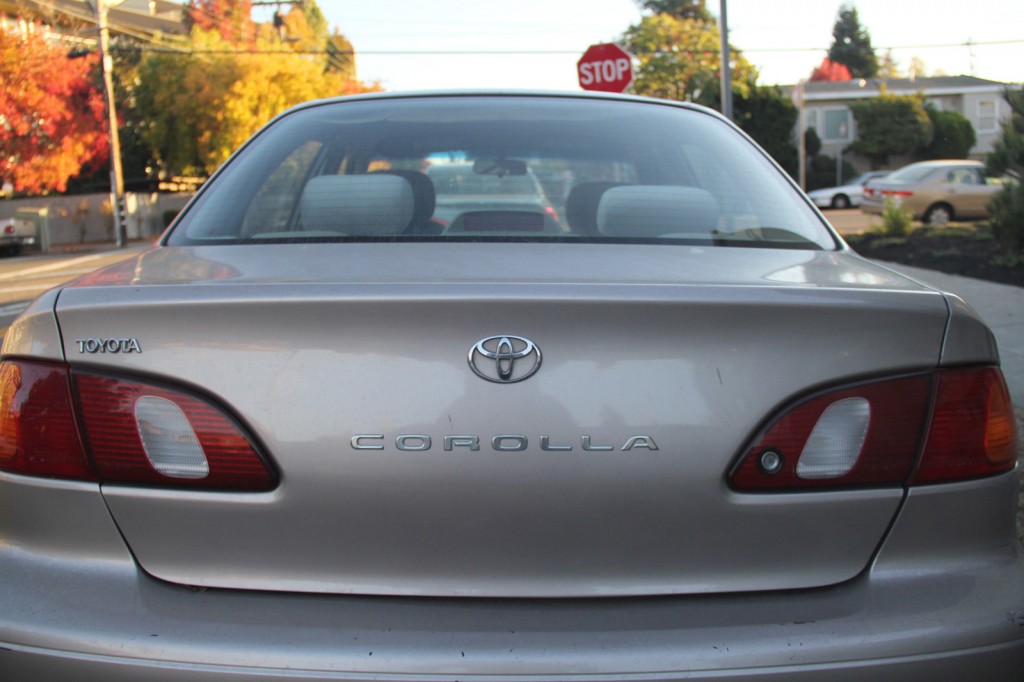