How can such a small plaza generate so much buzz? After a fierce debate, the city’s experiment in urban design appears destined for lowered aspirations since the City Council voted last week to restore two-way traffic to the square at Broadway and Telegraph Avenue in downtown Oakland.

Latham Square opened in August as a pilot project of the city of Oakland to create a pedestrian plaza at the intersection where Uptown meets Downtown. But just six weeks into the six-month pilot project, the city opened one lane to traffic and will now open the plaza back up to two-way traffic.

Situated beneath the Rotunda and Cathedral buildings, the v-shaped plaza features benches, chairs, landscaping and signs. According to a city staff report, eight to 15 people use the plaza at any given time during lunchtime or early afternoon hours. It has also been a popular site for events and concerts.

However, the project has been criticized from the beginning, with city staff taking much of the heat for not communicating with both the public and City Council.

“I think the city owes everybody an apology because no matter what we are going to end up doing the communication was very poorly handled,” said Councilmember Rebecca Kaplan.

As it is currently designed, the plaza allows one lane of traffic from Telegraph Avenue.  The approved proposal will permanently expand the plaza from 2,500 square feet to 9,500 square feet, but also open up north and southbound traffic lanes on the 1500 block of Telegraph.

Advocates for increased dedicated public spaces for pedestrians and bicyclists are upset at the prospect of two-way traffic, arguing it will make the plaza substantially less safe.

“I don’t think we can really call this a usable, significant pedestrian plaza that is safe for pedestrians when you have two-way traffic next to it,” said Councilmember Dan Kalb, who along with Councilmember Kaplan abstained from voting for the plaza redesign.

“The most concerning aspect of this project and its process has been the strong desires of a few local businesses who fear loss of driving customers if Telegraph is closed to cars, even partially closed as a one-way street for one half block,” said Dave Campbell of the East Bay Bicycle Coalition. He hoped to show that bicyclists are actually some of the best customers.

Councilmember Lynette Gibson McElhaney, who oversees the district that includes Latham Square, said local businesses and developers were concerned that traffic and lack of access would keep customers away.

“Given the revitalization of this corridor downtown and the contemplation of major retail development and the reconfiguration of the Sears building, I’m hearing from the developer that we need to abate traffic,” she said.

Kim Powers, representing a research-consulting firm in the area, expressed the sentiment of many local business owners. “We feel two way access improves dynamics of the area and flow of traffic,” he said.

The project is funded by a $2.9 million state grant that requires it be completed by December 2014.

There will be a community meeting at 6 p.m. Jan. 30 at the American Institute of Architects, East Bay to discuss future design elements and programming for Latham Square, including lighting, landscaping and seating options.

Damon Gallagher is one small business owner near the plaza who remains supportive of blocking off traffic entirely in Latham Square.  “This is a walking town,” he said. “This is a biking town.” 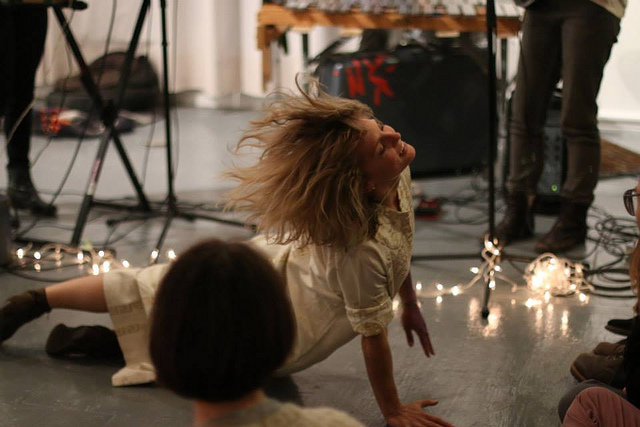