In the back corner of the Great Oakland (GO) Public Schools office, a young man with long dark curls and a blue Cal sweatshirt hangs up a phone and dings a silver desk bell. A woman nearby gives a muted but excited “Woot!” It’s a weekly phone bank night and another person just pledged support for Measure N.

In this spacious, open-air office in Jack London Square, the volunteers sitting amid the half-eaten pizzas, flip chart papers and piles of yard signs seem to feel a sense of calm. Perhaps that’s because the handful of people—teachers, parents, and a high school student still wearing a onesie from Pajama Day—have been here a few hours. Or perhaps it’s because Measure N has no official opposition, and for this crowd, the bell dings are a pleasantly regular noise.

Measure N, or the “Oakland Unified School District College and Career Readiness for All Act,” would levy a tax of $120 per piece of property for Oakland residents and businesses.Those funds would be used for college and career preparation programs for high school students. The measure is on the November 4 ballot for Oakland residents and requires a two-thirds supermajority vote. If passed, the measure would generate about $12 to $13 million annually, or about $1,000 per student, said Marc Tafolla, policy director for GO Public Schools, an education nonprofit that aims to inform residents about school board activities and elections.

The school board and district staff created Measure N, and the OUSD Board of Education unanimously voted to support the measure in June. Community organizations including GO Public Schools, Oakland Community Organizations (OCO) and the East Bay Asian Youth Center (EBAYC) are informing voters of the measure, said Tafolla, sitting across the table from a pumpkin with the GO logo drawn on it. GO’s political action committee also contributed $13,000 in funds to promote passage of Measure N.

The school district already runs a handful of programs that expose high school students to college and career opportunities, or “Linked Learning.” Some schools offer academies, smaller, themed programs through which students learn in a group and study curriculum based on core concepts like technology, fashion or the environment. Some schools offer “pathways,” electives that focus on a theme but can be mixed and matched. And some schools offer internship programs, partnering with local organizations to give students real, rigorous work experience at a young age.

Measure N is written to supplement, not replace, current high school funding. Schools cannot cut their current budget if extra money arrives from Measure N, Tafolla said. The parcel tax, which would take effect in July, 2015, would last for 10 years unless renewed by voters, and it would exclude senior citizens and low-income property owners who would apply annually for an exemption. Measure N calls for the appointment of an oversight commission of five individuals and earmarking at least 90 percent of funds to go directly to educational programming, not administrative costs.

According to the measure’s language, its goals are to decrease high school drop-out rates, increase graduation rates and students’ readiness for college and careers, smooth the transition from middle to high school and “reduce disparities in student achievement and student access to career pathways” based on race, ethnicity, and other factors. In a district where the graduation rate was 62.6 percent in 2013, there’s still a ways to go to catch up with the state’s graduation rate, which is just above 80 percent. However, Oakland students in Linked Learning programs had an 84 percent graduation rate, according to a letter written to parents by Antwan Wilson, the OUSD superintendent.

“This is the culmination of years of work and a lot of theory and practice around the country about what ideas will lead to success,” said OUSD spokesman Troy Flint in a phone interview on Tuesday. Although the district has many college and career-focused programs, they are piecemeal, Flint said, and now “We need to do this in a way that shows greater foresight, planning and something more comprehensive than what we’ve done previously.” In addition, said Tafolla, state funding tends to focus on elementary schools, and Measure N is an opportunity for the local community to “focus on the secondary schools.”

While there is no organized opposition to Measure N—there’s no counter-argument on the Oakland ballot and no group launched a website—GO Public Schools Manager of Teacher Leadership Lisa Rothbard said some people may not support the measure because funds raised would go to charter schools as well as public ones. Because state funding is largely based on the number of students in a school, public and charter schools are often at odds with each other, particularly when Oakland students transfer to charter schools and take those state funds with them. “Oakland students go to Oakland schools,” Rothbard said during a break from phone banking, noting that opposing Measure N will not change the reality of charter school attendance. “I would like to invest in all Oakland schools.”

Jon Coupal, president of the Howard Jarvis Taxpayers Association, a group working to protect taxpayers’ rights, said the oversight for parcel taxes—which are numerous on the California ballot this election cycle—may be poor. While Coupal did not comment on Measure N specifically, he said of parcel taxes in general, “Individual voters need to dig into that. Where is the money really going?”

Voters have to “read the ballot funding very carefully,” he continued. He also said that despite exemptions for senior citizens, applications may not be made readily available and may require annual approval. Coupal said that often those implementing the tax “don’t advertise the exemption.”

OUSD board member Jumoke Hinton Hodge (District 3), said in a phone interview that now is a unique time to pass this type of measure because the district leadership team, including the superintendent, his cabinet and the school board, is “a stronger and better organization” than in the past.

Others at the GO offices on Monday night pointed to additional, less obvious benefits of Measure N. If it passes, said Lacy Asbill, founder of Moving Forward Education, the funds would help all high school students, including those she works with in continuation schools. Asbill sees the benefits of connecting her students to the growing construction industry in Oakland, and said that since continuation high school students have shorter school days, they could benefit from spending their time learning from an internship. “They need to know that there are meaningful jobs that are accessible to them and that could bring them happiness and stability in their lives,” Asbill said.

Rothbard, who not only works with GO but also has spent years teaching at Skyline High’s Education Academy, a Linked Learning program for students interested in careers in education, said the measure would help Oakland teachers. Academies “make school relevant when it often doesn’t feel that way” to students she said—and this makes teaching more enjoyable.

A few computer-and-headset stations away from Rothbard sat Hezekiah Burton, a Skyline graduate and now a freshman at UC Berkeley. Burton, 18, regularly volunteers for GO’s phone bank. He said without the Computer Science Academy he was enrolled in at Skyline, he would have been “less engaged, less enthusiastic.” He looked forward to taking computer classes everyday, he said, and called the program “very helpful to give the toolsets for college and jobs.” He’s been doing work as a paid intern for Comcast because of opportunities he gained through the academy.

Burton said he felt better about going to high school because he knew the programs and teachers were meant for him. He said that he had friends who weren’t performing well in school, but in the academies they did better and graduated on time. “It’s that much easier to wake up everyday and say ‘OK, I’m going to go to school,’” Burton said. “I’m going to learn.” 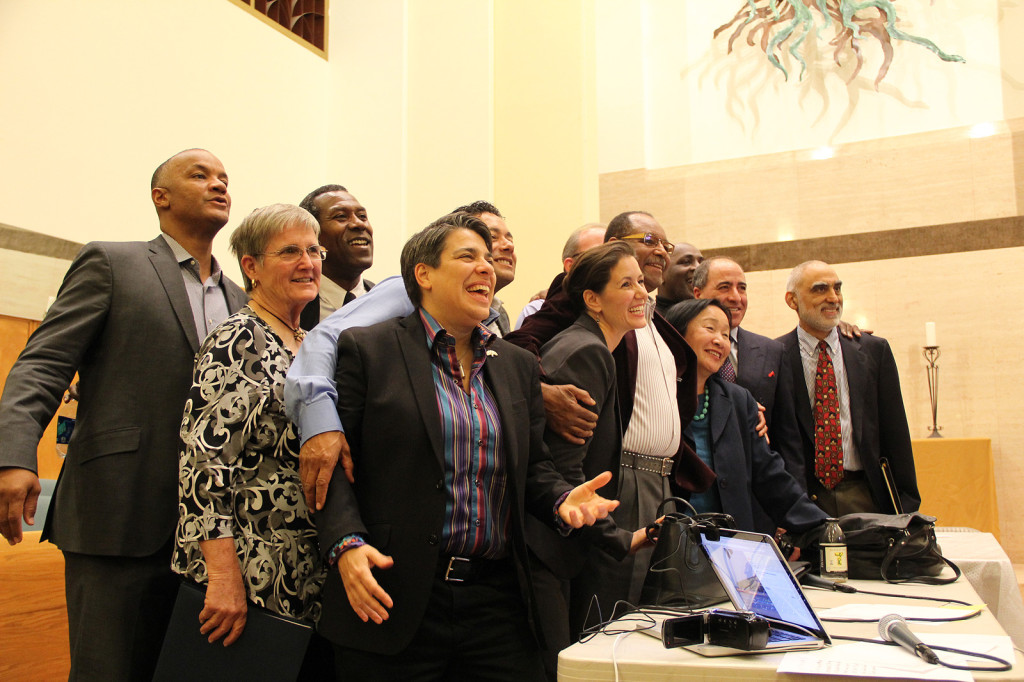 Life on the trail: A day campaigning with Oakland’s mayoral candidates