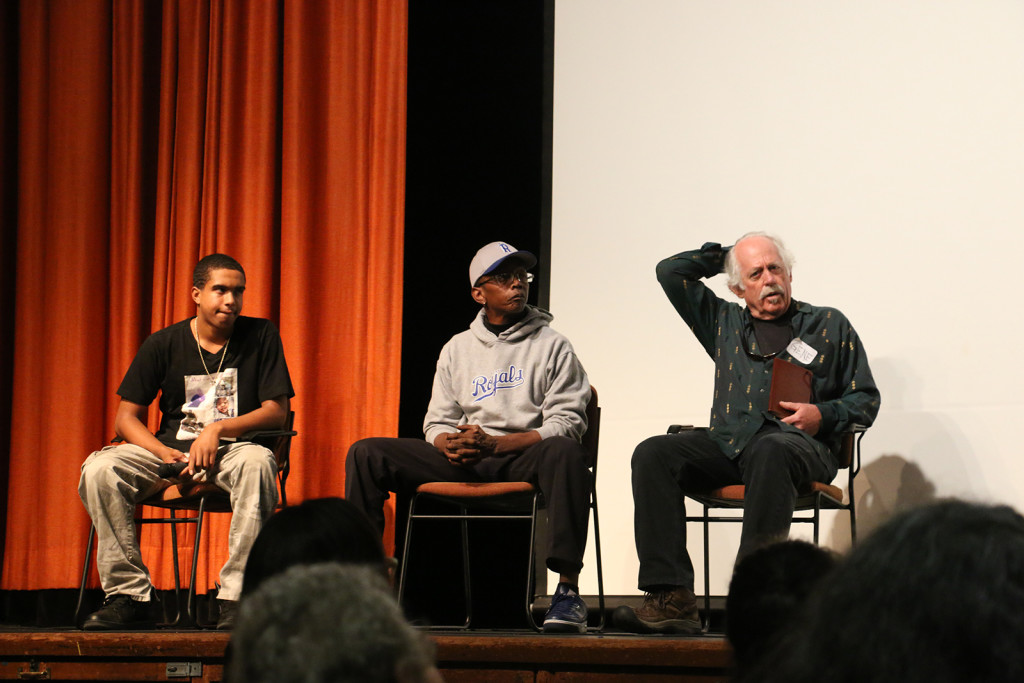 Baseball film reflects relationship between the East Bay and Cuba

Coach Roscoe Bryant always wanted to show his youth baseball team, the Oakland Royals, that there was a larger world than their Ghost Town neighborhood. Every now and then, he would bring his team across the Bay Bridge to San Francisco to show them just that. And in 2010 he took them even farther: They traveled across the United States and the Caribbean to Havana, Cuba, to play with a youth baseball team over there.

Their journey became the 2013 documentary Ghost Town to Havana, filmed by Richmond director Eugene Corr, which was shown at the Unitarian Universalist Church of Berkeley on April 2. The movie, shot from 2007 to 2011, alternates between Oakland and Havana, jumping back and forth between the ballparks of the two teams and culminating in a series of games between them.

Corr, Bryant and Rontral Arcement, an original Royals player who is now 15 years old, were present for a question and answer session afterwards, taking the stage after their film characters had disappeared from the large screen in the church’s auditorium.

Bryant became a coach after witnessing a young man’s murder in front of his house. He and his then-wife decided that forming a baseball team was a way they could help the young men of their community, and so Bryant joined the vanishing ranks of African-American volunteer coaches in the East Bay, founding the Oakland Royals.

Cuban coach Humberto Nicolás Reyes, on the other hand, was one of many coaches throughout his country, where every municipality has its own youth baseball team, teaching children ages 5 to 14. His red-jerseyed team, named Centro Habana for their municipality, consisted of 14 boys, many of whom had aspirations of playing for the Cuban national team someday. (When the nine-member Oakland Royals played against Centro Habana, they “borrowed” two or three of the Cuban players to make it even.) Reyes earned $14 per month as a coach, $6 below the national average, and, while resources were scant, in every scene in the movie he was wearing a grin, cracking a joke or giving life advice to players or Bryant.

The film introduced viewers to a few players in particular: Chris Fletcher, a player from Oakland whose biological father had been murdered by a rival gang member, Ridel Soria Madam, a Cuban player whose sailor father had left at a young age but who was surrounded by a whole host of “mothers” and caretakers, and Arcement, the youngest player on the Royals.

“There were a lot of things going on in my life,” said Arcement of the reason he joined the Royals. “My separation from my parent. A lot of issues. Anger issues. Coach Roscoe, he inspired me to do something I’d never done.”

The Oakland Royals spent a week in Havana. Over the course of that week, they played a lot of baseball, learned to salsa dance, picked up girls and forged friendships with Reyes’ team and the baseball-crazy extended families of the Cuban ball players.

Arcement recalled going swimming every day after playing ball, and learning from Coach Reyes. “Basic stuff that I could have learned on my own from playing in Oakland,” said Arcement, “but I learned a lot from the coach.”

Corr first came up with the idea after traveling to Cuba in 2007. The trip itself was an act of defiance against the George W. Bush presidency, which had tightened restrictions on American travel to Cuba. He attended a youth baseball game there, and that was where he met Reyes.

“It reminded me so much of Richmond in the ‘50s, when baseball was king, when Nicholl Park would be filled with fans and families,” said Corr, whose father had been a baseball coach in Richmond. To Corr, this was the golden time, not only for baseball, but for Richmond as a city. “We romanticize this stuff,” said Corr, “which I’ve tried to fight against, but it’s true.”

When he returned to the East Bay, he started to look for another coach to follow: he wanted to juxtapose Reyes’ story with that of a coach in Richmond or Oakland, comparing and contrasting the difficulties they faced. “I knew if I followed them, those obstacles would appear,” said Corr, “and their effort to overcome those obstacles would be the movie. Not easy to fund a movie with that.”

One day, a friend handed him an article about Bryant from the San Francisco Chronicle, and Corr decided that Bryant would be his second main character. But Bryant was wary at first. “I’m kind of sensitive about my community, and how they keep portraying us,” said Bryant. Corr won him over after agreeing to Bryant’s stipulations: no drug scenes, no pimps, no guns, no gangs.

In 2010, the Oakland Royals went to Havana to meet up with the Centro Habana players. It hadn’t been easy to get there. The Royals had to obtain special licenses from the United States government—it took a year of fundraising and applying for passports and licenses to make the trip happen.

It was also a tough time for Bryant emotionally, he said. He and his wife had gotten a divorce, and in the movie, he said that “baseball had replaced his marriage.” Despite wanting to quit at times, Bryant was invested in the team, and he had made a commitment to Corr that he would follow through for the duration of the shoot.

Reyes, too, was facing familial struggles. His wife had just suffered a heart attack and the whole left side of her body was paralyzed.

“Subjects allow you to film when they’re dying inside,” said Corr, “and that’s hard.”

When the Oakland players first touched down on Cuban soil, at first, they weren’t happy about being in Havana. Instead of French fries there were potato chips. They didn’t want to speak Spanish. But baseball and the Cuban families who supported the players brought them closer to their briefly adopted country.

“In Oakland, I didn’t come from a lot,” said Arcement. “But you go to Cuba, it’s worse. They have it worse than we do.” (Corr bragged that Arcement was the only player who actually researched Cuba before going.)

Bryant and Corr recall playing a ball game with Reyes’ team and running out of baseballs. “If you hit a baseball out of the park, that was it,” said Corr.

“I think that game lasted two innings,” said Bryant, grinning at the recollection.

On the other hand, said Bryant, the Oaklanders thought the Cuban players were fortunate in their family support. “In Oakland, our men are gone,” he said. “But in Havana, every boy has three to four dads,” referring to all the male relatives and friends who love and care for the players in Havana.

In fact, one Oakland player’s stepfather was killed during their week in Havana, and he returned home to memorial candles on his front steps.

Bryant is still coaching in Oakland, and has expanded the number of teams he coaches. And while contact has fallen off between him and the Cuban team, he said, Reyes has had a profound effect on him as a coach and as a human being. “I loved Coach Nicolás,” said Roscoe. “He was the guy sent for me. He’s helped me professionally, as a baseball coach, and personally as a human being.”

Many audience members were from the church itself, but others had heard of the event through the church’s social activism network, and traveled to the hilltop Berkeley location from other areas. “It piqued my interest, to see what that exchange looks like in the changing times and politics,” said Oakland resident Michelle Martin, speaking about the idea of a baseball exchange between Oakland and Havana.

In the church’s entryway, community members passed out flyers, advertising for social justice groups, as well as for the sister city program that connects Richmond to Regla, a town in Cuba. “Regla is a small city across the Bay from Havana,” said Rita Barouch, chairperson of the Richmond-Regla Cuba Committee. “Much like San Francisco and Richmond. They have a refinery, it’s largely Afro-Cuban. So it seemed like a good idea.”

Next week, Corr will be touring North Carolina, Louisiana and Florida to present Ghost Town to Havana on the Southern Circuit Tour of Independent Filmmakers. During spring break this year, 17 baseball players from the Wheelhouse Academy of Baseball in Richmond will travel to Havana to play baseball and receive training from professional Cuban players. The group Fito Reinoso y Los Clásicos de Cuba performed in the entryway at the Unitarian Universalist church in Berkeley. Cephus Johnson and the men of Black Lives Matter