Near 35th Street and Magnolia Street in West Oakland lies the city’s first temporarily sanctioned homeless encampment. The city’s six-month program to provide fundamental public services is now two-thirds complete. Yet with less than two months to go, Oakland is still left with lots of work to reach the city’s final goal.

The program, which started in mid-October, is designed to pilot the concept of “compassionate communities,” advanced by Councilmember Lynette Gibson McElhaney (District 3) and Alameda County Supervisor Keith Carson. Working with relatively limited housing resources, the city would first create decent or at least hygienic encampments for homeless groups, while trying to gradually find everyone different forms of housing to live in.

Last June, McElhaney secured $190,000 in funding from Oakland’s mid-cycle budget and promised the neighborhood and the homeless camp’s 40 residents that the program would close the camp by March 31, 2017, and find everyone a housing—“of some kind”—before that, according to Alexander Marqusee, policy analyst for McElhaney’s office.

“We’re trying to see what will be different if we treat them [the homeless] as constituents to be served, rather than problems to be solved,” said Marqusee.

This marks a strategy shift from other tactics like simply driving away the homeless, and is possibly a result of a surprising boom in the city’s homeless population.

According to Sara Bedford, Oakland’s director of human services, the homeless population in 2015 was 2,200 and 1,400 of those people were unsheltered, living simply on the streets or in their cars. But there are only 523 transitional housing beds and 350 year-round shelter beds in Oakland, including city-funded, county-funded and private ones. “And they are always full,” she said.

The program has already made some progress, providing trash cans, garbage pickup service, portable toilets and barricades to keep the encampment safe from passing cars. Social workers have talked individually with every person on the camp and noted down their situation and needs. The program has reunited one person with their family, found permanent housing for two people, and shuttled 18 others into transitional housing at the Henry Robinson Multi Service Center downtown, where they will await permanent homes for three to twelve months. According to Bedford, last month, 93 percent of people who left the center moved into permanent housing.

Bedford said the staffers were surprised by people’s will to move in a short time. Yet finishing the work that remains seems harder. The staff has lost touch with seven of the former camp residents and with the original people moving out, newcomers are filling the camp again, which is against the intentions of the original plan. “We have asked that the participants, the unsheltered residents, to self-regulate and ask people not to camp there,” said Marqusee. “But when people are desperate, they need stuff. I totally understand that.”

Over 40 people are now living in the camp—about as many as there were back in October—and with a line to enter Henry Robinson Multi Service Center, city staffers are not likely to find housing for all the people there before April 1. But Marqusee said they are still committed to the shut-down date of March 31. Program officials are now negotiating with the city and other government entities, seeking a parking lot or somewhere else to build an encampment for any people who remain there by April. “Oakland residents are generous. I’m sure the right neighborhood will welcome them,” he said.

Marqusee emphasized the importance of a good relationship between the camp residents and others in the neighborhood. Staffers on the program introduced both groups and talked with them on a regular basis. “Most of the homeless people in Oakland are residents” who grew up nearby, he said. “When they get to know each other, a lot of the reservations are gone, because neighbors realized these are people from the community.”

The conversation feedback has also been used to adjust program policies. “We cancelled the donation box because most of the time neighbors just brought their junk to the camp,” Marqusee said. They also followed the homeless residents’ suggestion that they not move people’s tents around and rearrange the site, in order to preserve the original community.

One reason for introducing trash service to the camp was to clean up the needles often left on the ground in and around the camp by injection drug users. But Bedford said that their main focus is “housing first,” not concerns about drug abuse. Homelessness makes people more vulnerable to drugs, she said, and the city would focus first on finding people a place to live, then next help them by providing health services. “This [substance abuse] is not a barrier for the program,” Marqusee added.

Yet for some of the people living there, drugs are what helped make them homeless. Rayetta Simon, born in Oakland, has lived near the camp for two years and this is her eighth year being homeless. “Everything was fine until I grew up and went into drugs. … I have been struggling day and night,” said Simon.

Simon said she felt lucky to live on this camp. She used to sleep on the streets near the park at 36th Street and Martin Luther King Jr. Way, where a self-organized encampment was just cleared out by the Oakland Police Department and city administrators last week. “The public services are great here,” she said. But Simon still blames the city for clearing people out of the park. “The park has been there for a long time. It has been a normal park, a dog park, a park for drugs. … No one complained when it was for dogs but when homeless people lived there…” she stopped and sighed.

Marqusee said the concept of “compassionate communities” was inspired by similar models in several West Coast cities, such as Santa Rosa and Seattle. Jennifer Wolch, Dean of the UC Berkeley College of Environmental Design, said these models have long been opposed by affordable housing advocates. “It’s a model to normalize that kind of living environment on the streets,” which is not a dignified environment for humans, she said.

Providing some public services for the homeless is nothing new in Oakland. However, Oakland has fewer resources than other big cities like San Francisco, which spends about $45 million each year on homeless services and $196 million on low income housing and eviction protections.

But both Marqusee and Bedford seem optimistic about the program. “It’s too early to tell it is a success or not. … But we’ll try to promote it to other encampments,” Marqusee said.

Bedford added that though the program seems to be working, the most important and effective way to solve the homelessness problem is still “to provide enough housing for the extremely low-income groups, either by building houses or by having some landlords rent their houses below the market price.”

Wolch warned that the compassionate communities model can only be successful and sustainable with an aggressive housing strategy backing it up. “If you don’t have enough housing for the group you choose in a certain time, it’s not going to work. … This will be especially challenging for Oakland with a more and more expensive [rental] rate,” she said.

Yet people at 35th Street have high expectations about moving into a nice place. “I know I’m on top of the list, the list to go to Henry Robinson (Multi Service Center). … I’ll get my house. I’ll get my job. And I’ll get out of drugs,” Simon said, as she sat on the ground and chewed a sandwich someone had left her after driving by.

Across the street from where she sat at the edge of West Oakland and Emeryville was a tall beautifully designed apartment building, where even the cheapest studio costs $1,500 a month. 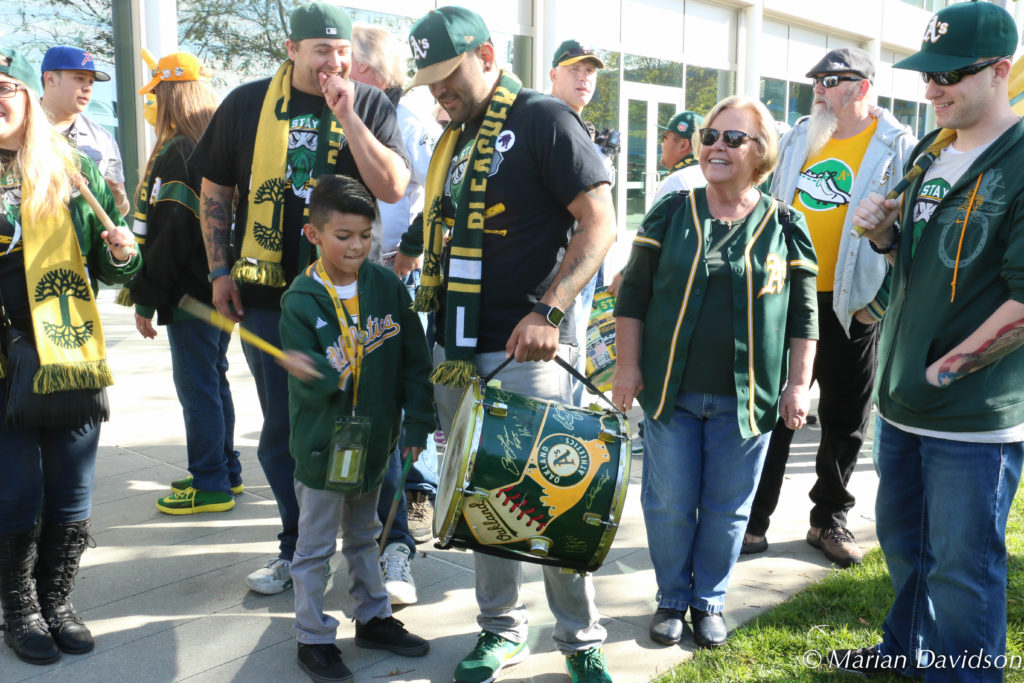