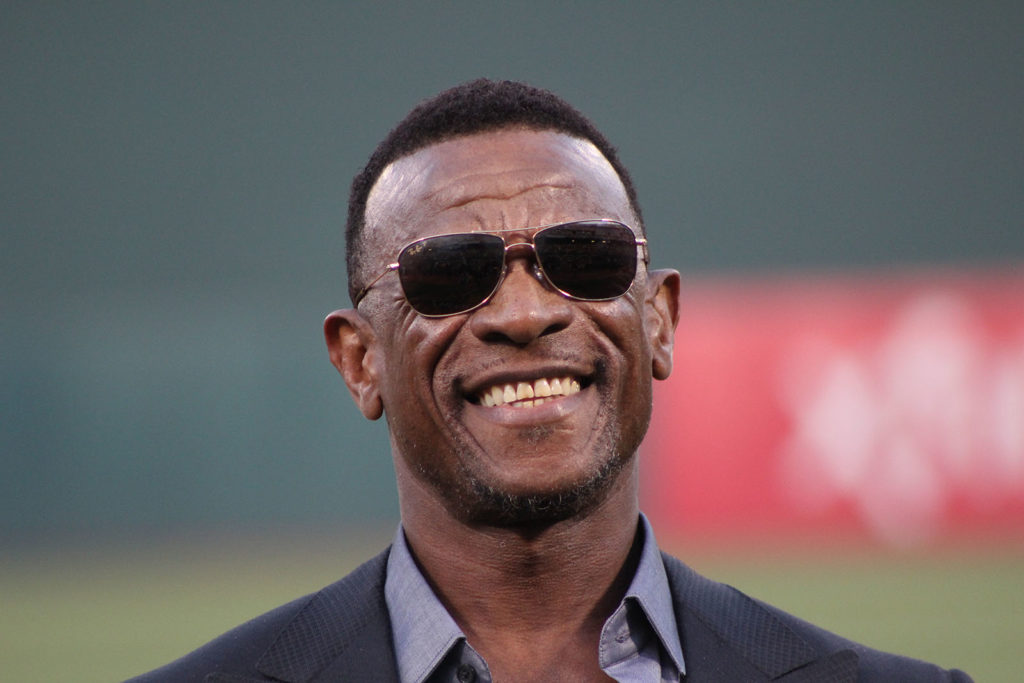 Ricky Henderson tried not to smile. He strode onto the Oakland Athletics’ field with his unmistakable swagger—a delicate mix of confidence, bravado and humility—embodied by his sleek blazer, grey trousers, sunglasses, and a peek of his chest exposed by his shirt’s top two open buttons. He strolled down the field as the crowd applauded, with a calculated cool upon his face until—he couldn’t help it—he flashed a smile.

Henderson played 14 years of baseball–in four different stints–on that field as a left fielder, leadoff hitter and baserunner. But before Monday, it wasn’t named after him. Now, Rickey Henderson Field is here to stay.

“My journey and life lessons have come from Oakland,” said Henderson, from behind a podium in front of the pitcher’s mound. The Major League Baseball Hall of Famer gave a speech to a sold-out crowd of over 30,000 fans as a part of Monday night’s opening day game against the Los Angeles Angels.  “My heart and soul is forever Oakland, and now you have me permanently in Oakland, with this field. I love you, Oakland.”

Henderson then made it a point to thank the Oakland school district, Oakland Parks and Recreation, the city, his family, friends and, of course, the fans, without referring to himself in the third person, a quirk that made Rickey Henderson, well, Rickey.

As a child, Henderson used to sneak into A’s games with his friends because they couldn’t afford tickets. “We would find a way to get underneath the fence or cut the fence, and then during game time, we would sneak in and see the ballgame,” he said during a press conference before Monday night’s season opener. “A lot of my friends got caught, but I was too fast.” When he wasn’t watching games, he was playing in fields and little league parks across Oakland, some of which are now named after him, too.

Henderson graduated from Oakland Technical High School in 1976. In high school, Henderson didn’t stick to just baseball—he played basketball, ran track, and was an All-American running back with an impressive 1,100 rushing-yard record during his senior season. He was offered over a dozen college scholarships, mostly for football, but instead pursued his baseball dreams and put his mother’s fear of a football injury to rest.

Before making it to the big leagues, Henderson played for minor league teams in California, Idaho, New Jersey, Utah, and Mexico. He got his start playing for the A’s in 1979, though the team drafted him in 1976.

Within his first two years in the major league, Henderson broke two Hall of Famers’ records—Ty Cobb’s 65-year-old stolen base record (100 to Cobb’s 96) and Lou Brock’s record for the most stolen bases in a single season (130 to Brock’s 118). Henderson would go on to become a 10-time All Star, the Most Valuable Player in 1990, a two-time World Series winner (1989 with Oakland in “The Earthquake Series;” 1993 with Toronto) and set all-time records for runs scored (2,295) and unintentional walks (2,129), which still stand today.

The idea to name the field after him developed during the team’s new president Dave Kaval’s office hours—weekly meetings he hosts to meet with fans to listen to their thoughts and suggestions. One fan suggested that they “honor our past more.” Kaval listened.

“It’s the least we can do to honor such an amazing person, not only in baseball—really an American treasure—but also in this community in Oakland,” stated Kaval. Kaval and Henderson’s relationship dates back to over a decade ago when Henderson was on the verge of retiring because major league teams weren’t willing to sign him as a player. Henderson accepted Kaval’s invitation to play for the San Diego Surf Dawgs, a professional baseball team that made its debut in the now defunct Golden Baseball League that Kaval founded.

The A’s newly-dedicated field now features a yellow and white grass diamond with Henderson’s retired number, 24, at the top, and an old-school baseball card-esque outfield painting, both of which were hidden by tarps until the evening’s big reveal. Henderson’s wife and high school sweetheart, Pamela, one of his daughters and his mother, Bobbie Henderson, were seated on the field in plastic chairs for the ceremony. James Guinn, the Bay Area scout credited for discovering and signing Henderson, helped peel back tarp on the commemorative diamond. The euphoric crowd chanted, “RICKEY! RICKEY!” as Henderson stepped to the mound to throw out the first pitch to former A’s teammate Dave Stewart.

A’s fan Al Franco stood near a concession stand wearing a white t-shirt with a cartoon illustration of Henderson, hands raised in the air holding a base, with the words “KING OF THIEVES” at the bottom and the number 24 as the backdrop. Franco remembers going to see Henderson play in 1980, when he was about nine years old. “I just saw his speed and his raw athleticism and I knew he was going to be great,” said Franco. “It’s about time they do something for him.”

Franco described what came to be known as a “Rickey Run”—the act of walking to first, stealing second and third, then coming home on a “sacrifice fly.” Henderson is known to many as “The Man of Steal” for his uncanny ability to steal bases. He still holds the record for the most career steals—1,406 he racked up while playing for nine different teams over 25 years (Oakland A’s; New York Yankees; Toronto Blue Jays; San Diego Padres; the then-Anaheim Angels; New York Mets; Seattle Mariners; Boston Red Sox; Los Angeles Dodgers). Henderson officially retired in 2007 at the age of 48, though he played his last game in 2003 as a Dodger.

“Everything we learned about stealing, we learned from Rickey Henderson,” said Laura Skaggs, who sat next to her best friend Barbara Lipnosky for their 43rd consecutive opening day game. Lipnosky, who played softball in high school, remembers seeing Henderson play when her alma mater, Skyline High School, would play against Oakland Tech, who later named their field after Henderson. “We knew that he was something special, even way back then,” said Lipnosky.

The two sat just a few rows back from the field, taking breaks from their laughter to watch the game closely. Green and yellow temporary Oakland A’s tattoos glistened on their forearms.

“We have our own treasures—we should respect and honor them while they’re living,” said Skaggs. “He’s a legacy; our friendship is a legacy and we continue to celebrate it, every year.”

The A’s will host its inaugural Rickey Henderson Day on its July 15th game against the Cleveland Indians. The Henderson, a hometown legend, makes his away across the field. (Brian Krans/Oakland North) Fire shoots up behind the MLB hall of famer as he appears before a crowd of euphoric fans. (Brian Krans/Oakland North) Commemorative Rickey Henderson pins were passed out to fans during the game. (Brian Krans/Oakland North)