On a Monday morning, about 10 people sat around a big table in the Oakstop office, a shared working and event space in Oakland. Most of them were looking at their laptops and wearing big headphones while typing on their keyboards. One guy was talking with someone on the phone. “Okay, I’ll email you by tomorrow,” he said. Everyone was surrounded by art pieces hung on the walls. “All of the artwork within Oakstop is done by local artists of color,” said Shane Lassiter, a community manager at the space. In the corner of the office, a black t-shirt was displayed in the wall, right below a drawing of a black man. The t-shirt read: “I ♡ being black.”

Oakstop also operates as an art gallery, and these days, the place is running an exhibit called “The Black Mail Collective,” which is meant to show diversity and break down negative images of black people as portrayed in the media. The exhibit started last December, and lasts another month. In the separate room where the exhibit is held, more than 15 people were scattered all over, sitting in groups of three or four, having conversations and drinking coffee. “That’s right, yeah,” or “That’s just sketchy,” said people as they talked to each other.

Art pieces and information about black historical figures were hung on the wall in the hallways, as well. In front of an elevator, there were photos of Malcolm X, and an explanation of his life story. In the hallway, one of the big art pieces was done by Abba Yahudah, a lead designer for the new volumes of the Black Artists on Art book series. Yahudah was in the office, talking with his business partner about marketing his artwork by putting it onto phone cases.

Throughout the office, the sound of cars and buses was constantly heard, because the office is located right on Broadway Avenue. Around 20 kinds of leaflets were on a desk in near the front door, mostly about community events, such as one called “Beloved Oakland 2018: One night of Oakland love explosion.” Next to the front desk, around 10 books were on display and for sale, all relating to the work of black artists, such as “Art: African American.” People are working at the Oakstop office, sharing the working space each other. 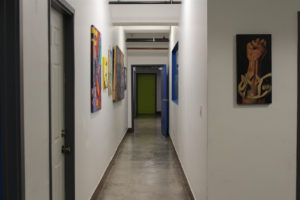 Oakstop operates as an art gallery. Art prices were hung on the wall in the hallways. Abba Yahudah, a lead designer for the new volumes of the Black Artists on Art book series, is standing next to his art work. Oakstop is a shared working and event space. People have meeting and eat lunch at the space. Abba Yahudah(left), a lead designer for the new volumes of the Black Artists on Art book series, is talking with his business partner at the Oakstop office.