‘It’s not going to be the same’: For one family, life will get harder when Parker school closes

Azlinah Tambu leaves her studio apartment off 73rd Avenue at 3:50 p.m. With enough time to pick up her younger daughter, Nasira, from after-school care at Parker K-8. She brings a set of keys, her phone and a bag of Cheetos. Before she locks the door, she makes sure she has her keys.

Parker is eight blocks away and less than a 10 minute walk. Along the way, Tambu exchanges hellos with a man sitting outside the corner store whom she’s known for years. She points out the familiar buildings: a tattoo shop, a church, a nonprofit center and a candy store that offers kids free ice cream.

Tambu arrives at Parker right before 4 p.m. While waiting, she sparks a conversation with a teacher she calls Mrs. B. The two talk about what their lives will look like once Parker closes at the end of the school year. As the two speak, a couple children — friends with Tambu’s older daughter — run up. “Hi Samira’s mom!” they shout, giving her a hug.

“What if they save the school?”

“Are they going to save it forever, or just for a year?” the teacher responds.

Tambu shrugs and soon after, Nasira, comes out.

Mother and daughter walk hand-in-hand back to the apartment. Tambu chooses to stand on the edge of the sidewalk closest to the traffic. Cars speed past with bass loud enough to shake gravel and glass in the road. On the walk back, Tambu stops by Homies Empowerment, a community center that stocks a community refrigerator and offers free breakfasts in the morning. She grabs a bag of oranges and knocks on the iron gate to say hello to the few people working there. Tambu asks if they’ve heard about the resignation of Shanthi Gonzales, a school board member who voted for school closures. They chat about Parker’s impending closure before Tambu and her daughter head back to their apartment.

Tambu has become a leader and a valuable source of information for the Parker community since the Oakland school board announced in February that seven schools would be closing, two others would merge and another two would lose their middle school grades.  Parker is one of the two schools set to close this school year. The closures largely targeted smaller schools that serve predominantly Black and brown students, despite there being evidence that smaller schools may better serve students.

Following the announcement, Parker parents had to decide which “welcoming school” in the district they wanted to send their kids to for the 2022-23 school year. Tambu, and several other parents at Parker, wrote “PARKER” on the form. They saw this as an act of resistance,  a way to communicate that they were adamant about staying.

Tambu found out the school was closing while on a trip with her kids to Puerto Rico. She booked a flight home the next day. Back in Oakland, she planned a protest with other Parker parents. Efforts started small, with handmade posters, some snacks and a group of 10 to 20 parents. But the protests got larger and included teach-ins, hunger strikes and community advocacy.  They are protesting gentrification, unequal access to education and increased danger to their children.

Tambu made sure to include her two daughters in the marches. For her and other parents, bringing children to the protests was a valuable teaching moment. Some of the first protests took place in February, during Black History Month. As Tambu’s children were learning about Martin Luther King Jr., Ruby Bridges and Nipsey Hussle they were also watching their mom advocate for them and stand up for what she believed in.

Tambu is preparing for things to change for her and her family next year. While she’s not giving up on the idea of  Parker staying open, she has signed her kids up for different schools. Nasira, who is 6 years old, will be starting second grade at Lockwood Elementary, and Samira, who is 11, will be starting sixth grade at Coliseum College Prep Academy.

OUSD communications Director John Sasaki said all Parker students have a designated school for next year and that the district was able to contact 77% of parents. Of the families who submitted forms, 90% are set to receive their first choice, Sasaki said. The district used addresses to place those who did not submit forms in nearby schools for next year.

Parker is all Tambu’s kids have ever known. Samira has been going to Parker since transitional kindergarten. While her daughters’ new schools are not significantly further, the student populations will look different.

Tambu’s children are Afro-Latina. At Parker, her children saw a lot of Black representation among the staff and faculty, whereas Latino students make up the majority at Coliseum. Tambu fears that her children will not experience another space with a large percentage of Black staff and students.

“Having staff that reflects the students makes a huge difference,” Tambu said. “Those are role models, especially for my oldest daughter because she’s been at Parker for so long, she’s never been to another school.”

Parker also has a rich history of celebrating and championing Black history.

“It’s not going to be the same. If you go to any school that isn’t predominantly Black, they’re gonna do Black History Month but it’s not gonna be the same,” Tambu said.

Her daughters’ new schools are close by but beyond walking distance for the family. This means extra money spent on gas and more time needed to get ready in the morning. Even five to 10 minutes  is significant for a single mother with two kids.

Tambu is a financial aid adviser at Mills College and also works with an organization called From Seed 2 Feed, a nonprofit that provides food and support to youth. She is fortunate to be able to be with her kids before and after school. But this is not the reality for many parents who are in a similar situation, with children attending schools further away.

Many parents at OUSD schools that are set to close have said the distance worries them because it makes their children more vulnerable, especially if they walk to and from school. On Tambu’s short walk to pick up her kids, she was approached by two men. One attempted to brush past her and when she moved to avoid him,  he stopped and said, “So where are you going?” He continued to call out to her as she walked away.

A  couple of blocks later, another man pulled his car to the side of the road where Tambu was walking and yelled to get her attention. She ignored his advances and soon he drove off.

Parents have expressed concern that their children, particularly young girls, will be exposed to threats or violence when traveling to school. Tambu also worries about what it will be like in school for Samira, who will be a pre-teen when she attends Coliseum College Prep Academy, which has grades six through 12. That means Samira will be with some students who are 17 and 18 years old.

There also are concerns that with increased travel, students will simply not show up for school. Absenteeism for African American students is on the rise in Oakland as well as across the state, OUSD and California Education Department data shows, and many believe school closures will create even greater disparities. 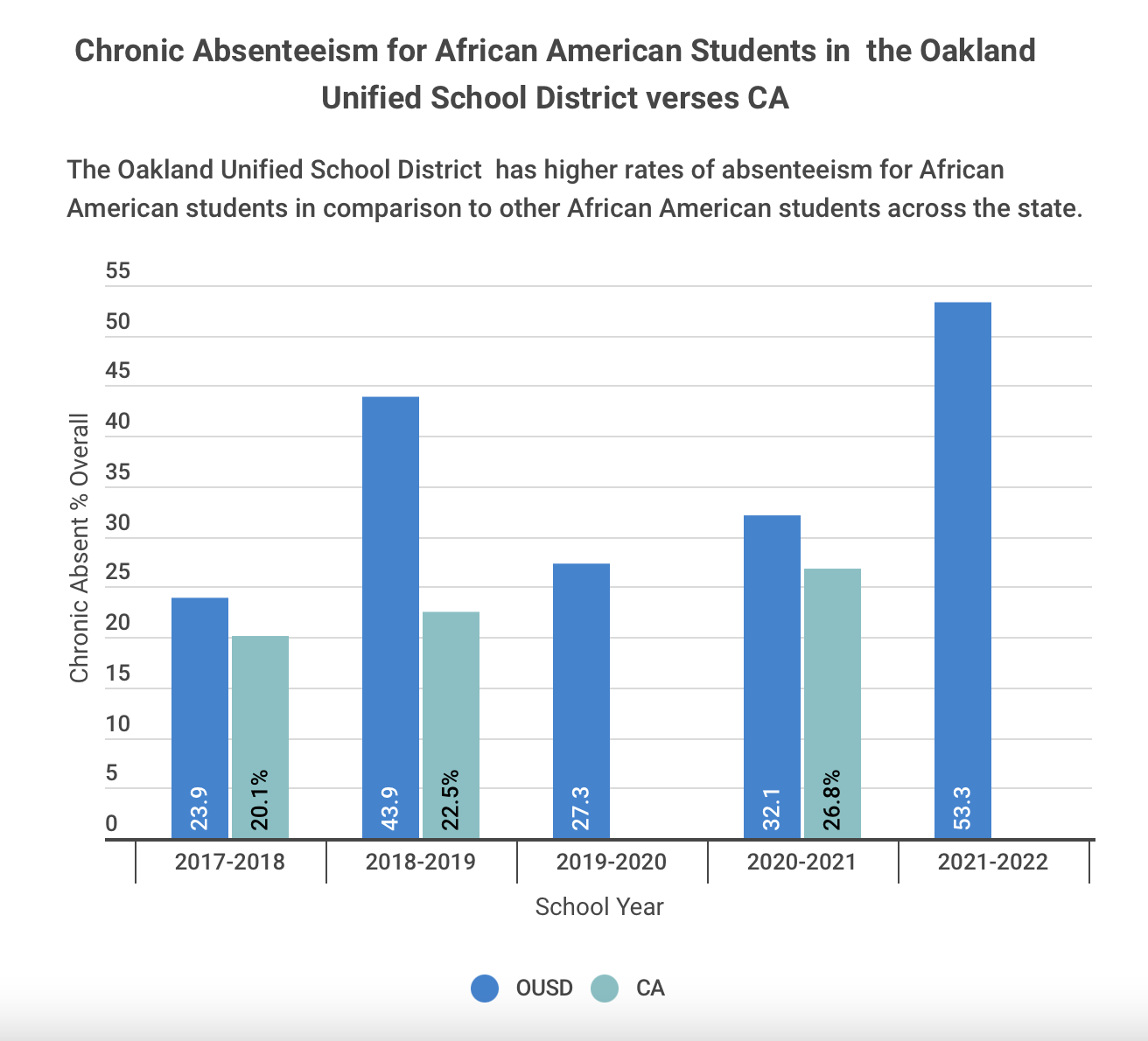 OUSD is seeing higher rates of absenteeism for African American students this school year than in previous years. (The California Department of Education did not collect absenteeism data for the 2019-20 school year because of COVID and does not have 2021-22 data available yet.)

Tambu is adamant about creating stability for her children and in their education. But despite her best efforts, some things are out of her control. In her previous Oakland neighborhood, there was a lot of community violence. Her kids were familiar with the sound of gunshots and fights breaking out. Tambu made the quick decision to move to the apartment where she and her children live today.

She remembers having her own life disrupted as a child and didn’t want her children to have to go through that. Born in San Francisco in the early 1990s, Tambu was raised by her mother and her grandmother, who emigrated from Malaysia. She lived in San Francisco for the first 14 years of her life, until one day when her family received a 30-day eviction notice. The landlord was raising the rent for the apartment they had lived in for over a decade. They were  forced to move out and at 17,  Tambu made her way to Oakland, where she has lived ever since.

“I think that may be why I’m so gung-ho about fighting for this school,” she said.

This story was updated to correct the name of the school that Azlinah Timbu’s younger daughter will attend.