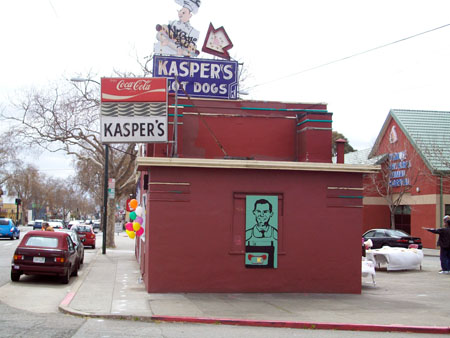 A tribute to Kasper’s: History, in hot dogs

Her water broke.  They grabbed what they needed, scrambled out of the house and hit the road.  The couple finally arrived, and it wasn’t a minute too soon.  The husband jumped out of the car and rushed inside to the counter.  “I’ll take two hot dogs please—to go!” he said.

“I can’t tell you how many times that’s happened, how many pregnant women wanted Kasper’s hot dogs before they went to the hospital,” said a smiling Harry Yaglijian, third generation owner of the now-defunct Original Kasper’s Hot Dogs on Telegraph Avenue.  The anecdote was just one of many shared this past Saturday at “Kasper’s Stories,” as residents recollected their memories of the famed Temescal establishment.

Five years after closing, the solitary maroon building stands quietly, the windows boarded up, its neon lights dulled and dusty.  The large billboard up top with a cartoon of founder Kasper Koojoolian eating a hotdog is now splattered with graffiti.

Hosted by the Site Memory Collective, comprised of a group of graduate art students from John F. Kennedy University in Berkeley, “Kasper’s Stories” is a part of the group’s commitment to “exploring the changing urban landscape as seen through individual and community memories of public spaces.”  In the case of Kasper’s, it’s a study of one place’s impact on its residents–both when it’s there and after it disappears.

“You don’t analyze how important something like this is until it’s gone,” said Kim Campisano, one of the organizers.  “And you don’t realize how important it is to have that everyday connection with the same place and people in what is a vastly changing world.”

After having moved his eponymous hot dog joint around Oakland a few times since the late 1920’s, Koojoolian settled at 4521 Telegraph Avenue in 1943.  He passed away in 1946, and his son-in-law, Harry Yaglijian, quit his gem-cutting job and took over the business in 1947.  Yaglijian’s son, called “Little Harry” by some to distinguish between the two, began to help his father in 1980.  He managed the family enterprise after the elder Yaglijian, who spent fifty loving years there, got sick in 1997 and could no longer work. The elder Harry Yaglijian at the counter.

Kasper’s hot dogs grew into the stuff of legend as the rich, famous, and influential came there in droves.  “Ron Dellums used to come here as a kid,” said Yaglijian.  “So did Eugene McCarthy when he was running for president…Danny Glover…Metallica.”

“I came in on a Saturday afternoon and Tommy Davis, at that time he was playing for Chicago,” said Ernestine Nettles, 58, about the professional baseball player.  “He sat in Kasper’s and ate five hot dogs nonstop.”

Jeff Norman, a 25-year resident of Temescal, noted an obituary he had read a couple of weeks ago.  “Some obituaries list the deceased’s range of interests…within this long line of interests this guy has had…it was mentioned that he loved Kasper’s,” he said.

“Kasper’s Dogs is to Oakland is what Garrett Popcorn is to Chicago.  There’s no place else in the world you can get it,” said Nettles.  “My mother who’s gone on now, she lived to be 94.  She would not eat hot dogs from anywhere else in the world but Kasper’s…if we came to Kasper’s, had dogs, and did not bring her one home, it was like, don’t come.”

But in 2003, Kasper’s—the joint that presidential candidates, musicians, and women in labor alike had made legend—closed.  “There were repairs that needed to be done,” said Yaglijian.  “The kitchen had been there, well, since 1943, and I didn’t have the money.”

On Saturday, former patrons could only crowd around the eatery that once welcomed them inside.  Fresh lemonade, coffee and cookies were offered as some wrote down their thoughts on yellow leaflets branded with the Kasper’s hot dog logo, others recorded their stories on audio recorders, and many took pictures with Yaglijian. Patrons gather outside to remember Kasper’s.

For the past ten years, people in the community and throughout the world have left comments online at the company’s website (OriginalKaspers.com), some of which were read by members of the collective.  One testimony signed by M. Chinita was particularly amusing for its longing description: “First the cook, Michael, bastes a long steamed bun with yellow mustard: right, left, and middle.  Then he fishes a long, skinny frank out of the steamer, places it in the bun, and smears that with mustard.  He dabs relish down the middle.  He slices fresh wedges of deep red tomato and semicircles of white onion and tucks them into the sandwich, taking his time.  Then (and this makes my heart skip) he tops off the whole thing with a chunk of real cheddar he hand-cranks through a rotary grater, forming a fluffy orange cloud.  ‘Salt and pepper?’ he asks.” “Little” Harry Yaglijian with a former patron donning a shirt with the Kasper’s logo.

But, besides the hot dog fetishizing and name-dropping, there were other things to remember–the people.  To some, it’s the men behind the counter that made Kasper’s special. A man at an adjacent traffic stop rolled down his window.  “Is Kasper’s open again?” he yelled.  Someone said no.  “I remember [the elder] Harry; he had the cleanest hands in the business, always washing them.  He was a good man.”  He then parked on the side of the road and chatted with the owner.

“Fifty years of relationship is like family,” said Anthony Graham, 63, who had eaten at Kasper’s since he was nine years old. “When I drive by here and don’t see this place open, it hurts me right here,” he said, pointing to his heart.

On the Memory Wall on the back side of the building, people left notes:

“We stopped by on the last day Kasper’s was open to have a hot dog and say, ‘see you later!’” one said.

“Harry, you helped me get started, and I’ll never forget that,” said another.

Yaglijian, smiling and mingling for two hours, said he wanted to reopen the place.  “It’s time,” he said, confident that he can get the money.  “I’ve kept saying that without giving the exact year for the last few years.  But this time it’ll be ready again by the end of this year or early next.”

“The quicker it’s open, the better I’m going to feel inside,” said Graham.  “I can start my tradition all over again with my granddaughter, who is seven weeks old.”

Recessionomics: On joblessness and Snuggies