When Dan Stevenson placed a stone Buddha across the street from his house in Oakland’s Eastlake neighborhood, it was out of desperation. “The corner was constantly being filled up with mattress and couches and junk and there was some drug usage, a lot of graffiti, people just standing around doing nothing—just depressing,” said Stevenson.

Stevenson and his wife, Lu, say they are not religious at all, but believe in the power of positive and negative energy, and so decided to try a small Buddha.

“If I’d have thought Christ would’ve pulled it off—” Steven began jokingly, then interrupted himself. “Except Christ is so controversial with people. Buddha is a neutral dude. When Ace Hardware is carrying Buddha, it’s pretty neutral.”

Stevenson, who says he has little faith in humanity, didn’t expect much to happen next. Maybe someone would steal the icon or graffiti him. Instead, little by little, neighbors began to care for the tiny statue and worship him.

At first, Stevenson said, he would just see the occasional apple or orange near the Buddha, left as offerings. With time, a Vietnamese neighbor named Vina Vo and her son Cuc Vo came to him, asking if they could care for the Buddha statue.

They built a platform for him to sit on and began to sweep and clean the area around him. (“In our religion, Buddha is not supposed to be on the ground,” said Cuc Vo.) Over time they painted him—at first he was just white, but they later painted him again, this time flesh-colored, with a golden robe, black hair and red lips.

Then they gave the shrine a renovation. Buddha is now elevated even higher and has a tiny house, just larger than a child’s playhouse, built by Vina’s husband. Every day, piles of oranges and apples are placed at his feet, next to burning incense. Chants are projected from tiny speakers behind his head. There is even a surveillance camera.

Each time they make a change to the Buddha or his surroundings, Vina Vo or another Vietnamese neighbor comes to Stevenson, asking his permission. “It’s your Buddha, I’m out of this now,” Stevenson always says, but nonetheless, a plate of fruit or a Vietnamese delicacy is always brought to him afterward. “It’s delicious. I mean, I eat it,” he said shyly. “But it’s a bit embarrassing.”

Now, every morning at 7 am, Vina Vo and other Vietnamese Buddhist women from the neighborhood meet there and dress in pale blue prayer clothes they brought from a Buddhist temple. They chant and pray and give offerings. The tiny shrine even has name plaque, “Phap Duyen Tu,” meaning “tranquility,” said Cuc Vo.

Any time of day, you can find Vina at the shrine. She and her husband, along with another family, are its primary caretakers. She is often there to pray, but also minds the offerings of fruit, flowers, bowls of black-eyed peas, and choco-pies. She shoos away stray cats and said there have been times she’s had to ask homeless people not to sleep inside the home built for Buddha.

She said everyone in the neighborhood loves the shrine and that all are welcome. “There’s been a lot of people who come by and maybe they aren’t Buddhist,” adds her son, “but they stop and talk and maybe they become Buddhist. Everyone is welcome.”

“It’s become this icon for the whole neighborhood,” said Stevenson. “There’s a lot of people that are not Buddhist that really come and just talk in front of him, they walk their dogs, they stand there—it’s a place where people meet and talk. It’s just cool.”

“He’s a popular little guy,” Stevenson continued. “He’s got a Facebook page. He’s got a Twitter account. He’s more connected socially than I am. He’s a great little guy, I guess. But it’s amazing, an amazing thing.”

Seeing this extravagantly cared for street corner, it’s now hard to imagine it was ever the place for dumping trash. “Since the Vietnamese have adopted the space, every morning they come and they clean it, and they sweep it,” said Stevenson. “It just kind of turned the whole thing around to zero. No more mattresses and no more garbage and no more graffiti and no more hanging out.”

Vina Vo, in turn, is thankful to Stevenson and believes his decision to place the Buddha statue there was divine intervention.  The morning sun lit up her face and the Buddha behind her, as she carefully arranged a bouquet of incense sticks while sitting on the step of Phap Duyen Tu. “Dan, thank you to Dan,” she said, gesturing toward Stevenson’s home across the street. 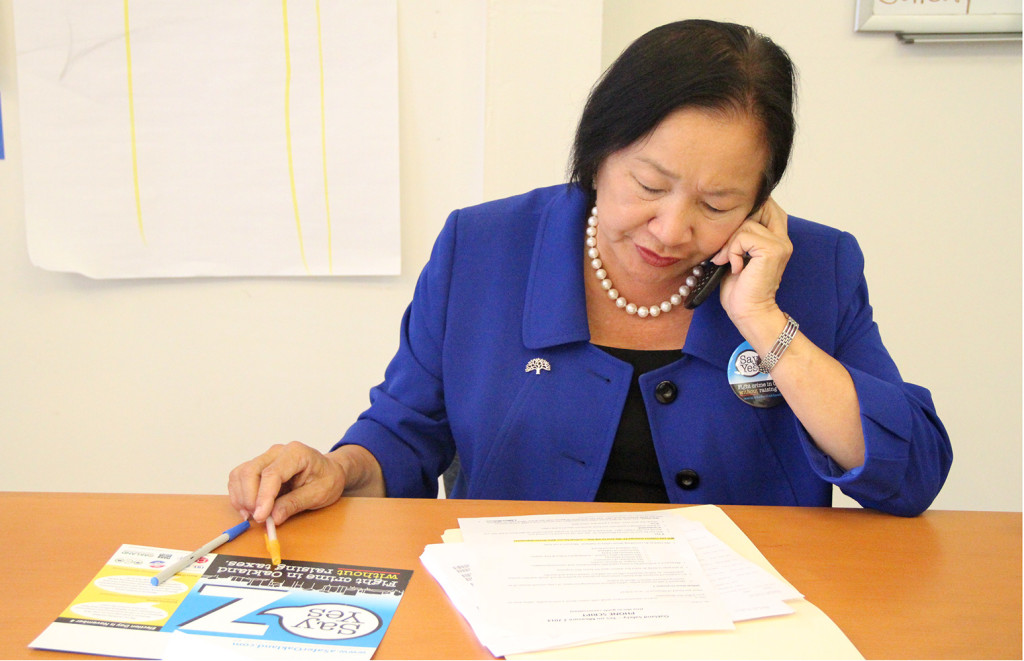